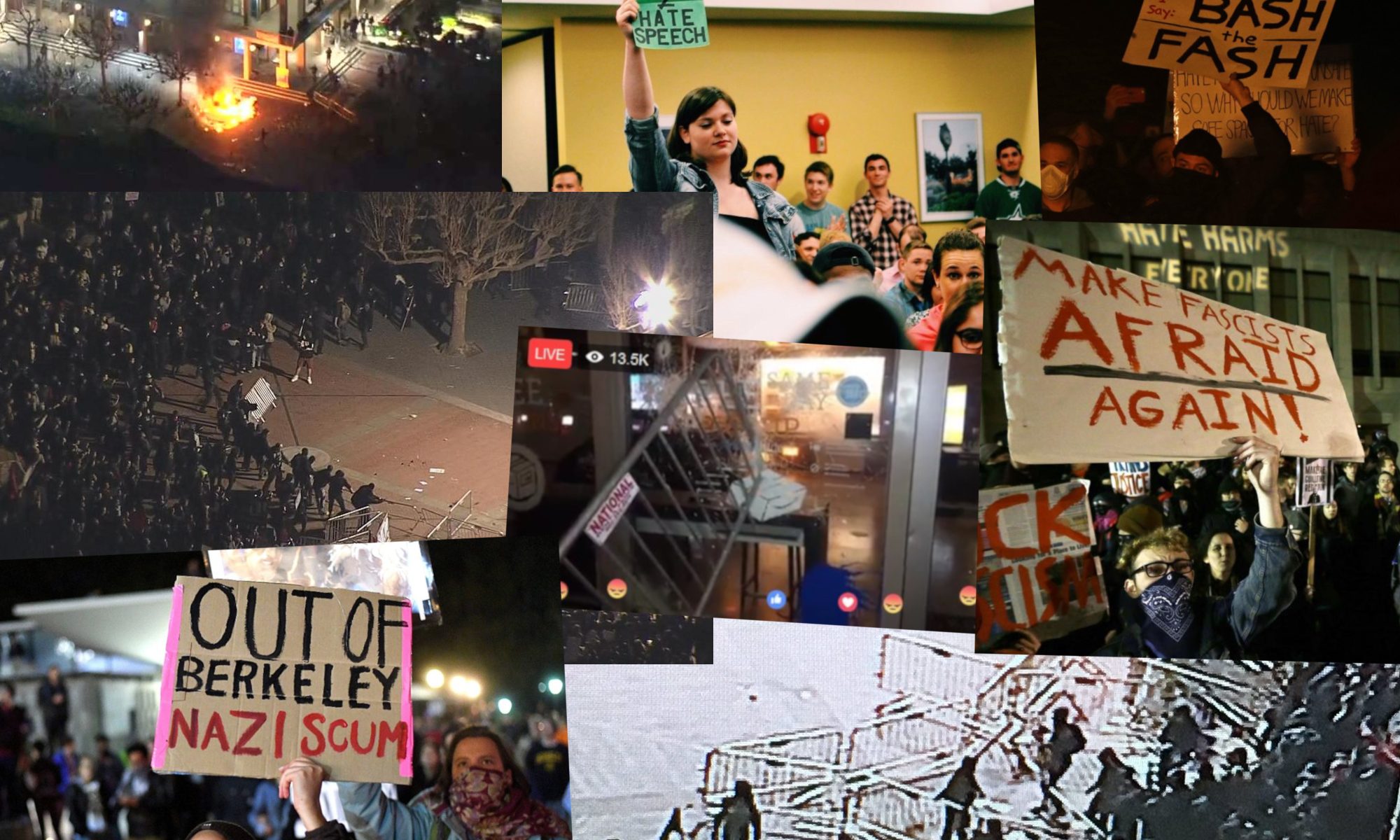 When I was little, I was a proud anti-fascist. The worst people around at the time was the right-wing extremists, with their signature bomber jackets and boots. But the ones I encountered, although maybe not being that extreme weren’t that bad. They had opinions, but they wouldn’t resort to violence to get their gibberish heard, and the debate was encouraged. Many were the hours spent intensely debating points presented by both sides, and I think in the end it left us all the wiser.

Fast forward 20 years. I’m still strongly against fascism, but just like the label feminist has been hijacked, so has the label anti-fascist. The worst people around today are the left-wing extremists, and society is bending over backwards to accommodate them. The anti-fascists have become the new fascists. And they aren’t afraid to use violence to silence the voices they don’t agree with.

Merriam-Webster defines fascism as “a tendency toward or actual exercise of strong autocratic or dictatorial control, early instances of army fascism and brutality.” That is literally the playbook and final destination of the PC movement, so if you got your ticket already you better get off before the fail train leaves the station.

While some may argue that the leftist PC-mafia isn’t a single person and thus can not be responsible for any autocratic or dictatorial behavior, I beg to differ. While the movement obviously consist of individuals, the crowd mentality that is brewing in their echo chambers lead to the same systematic oppression of differing opinions.

The whole debacle hit the mainstream media a few years ago, when safe spaces started popping up at universities around the world and political correctness started spreading like a wildfire. This lead to both John Cleese and Jerry Seinfeld refusing to talk at campuses as it wasn’t worth the risk of triggering some sensitive defender of political correctness. And they aren’t alone in thinking that the concept of political correctness has gone overboard and is outright dangerous; Chris Rock has also stopped performing at colleges because they are too conservative, “Not in their political views — not like they’re voting Republican — but in their social views and their willingness not to offend anybody.”

Cleese added that “comedy is critical,” and if society starts telling people “we mustn’t criticize or offend them,” then humor goes out the window. “With humor goes a sense of proportion,” Cleese said. “And then, as far as I’m concerned, you’re living in 1984.” — John Cleese in the Washington Examiner

The left-wing trigglypuffs of today are too busy protesting against speakers they don’t agree with that they fail to realize the extent of the idiocy they are promoting. And even worse, they do it while claiming their opinion is “free speech” and any differing opinion is “hate speech.” And don’t you dare try to stop them from exercising that free speech even though that is all they really do themselves. Oh the irony… 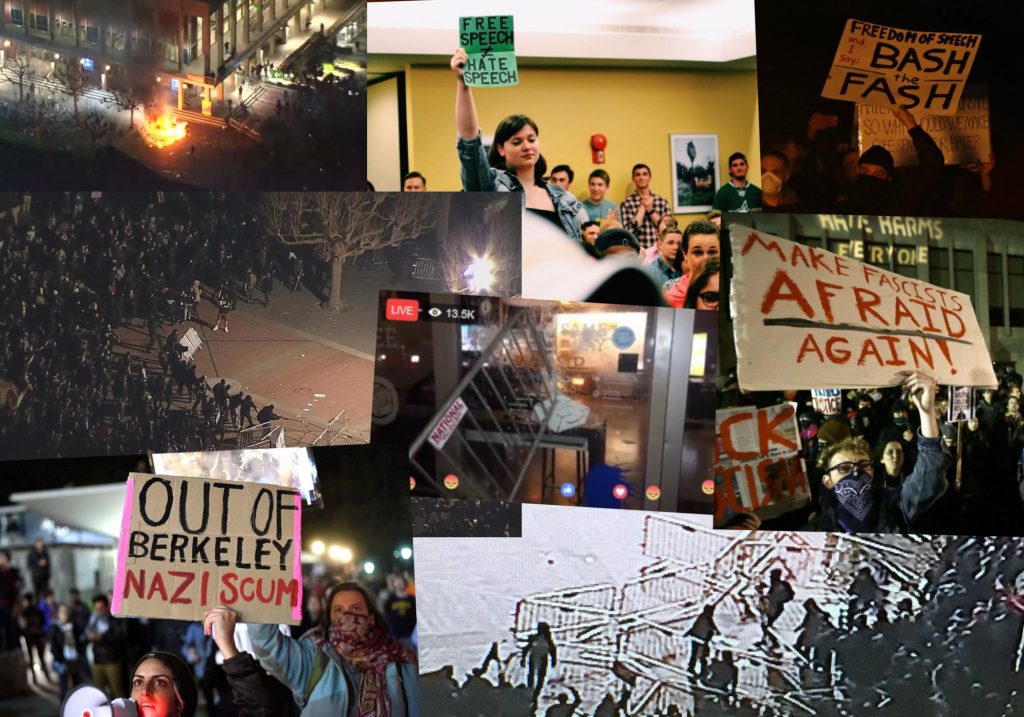 There is so much wrong with this, and it also brings up a lot of philosophical questions. Like what exactly is hate speech, and what should we do about it? How can any sane person find it acceptable to counter words with violence? Or let me rephrase that; how can anybody think they will be taken seriously when they can’t present any counter-arguments but instead turn to name calling and violence?

Desmond Tutu once said, “Don’t raise your voice, improve your argument,” and that is the only way forward. Let’s take for example the curious case of the never ending wave of Milo Yiannopoulos protests. Calling a homosexual Jew with a preference for black men a nazi, homophobe, and a racist is not only dishonest, but plain retarded. I don’t agree with everything Milo says, but that doesn’t mean that he doesn’t have a right to say it, or that I have a right to pull a bunch of nasty words out of the hat to throw at him. Freedom of speech is an absolute, and the principal cornerstone of modern civilization.

The American Bar Association has an interesting paper online that everybody should read. It puts forth a lot of sensible points while keeping both feet on the ground and acknowledge the slippery slope of putting restrictions on what is considered free speech. It also covers a few criminal cases, as well as an example of an event where a white supremacist was invited to speak at a campus. People were calling for the event to be cancelled, but it was allowed to proceed. He talked, the audience listened to what he had to say and responded. In the end, the audience was not impressed by his confusing beliefs. His idiocy was rejected only because the right to free speech was  recognized.

“Should hate speech be discouraged? The answer is easy—of course! However, developing such policies runs the risk of limiting an individual’s ability to exercise free speech. When a conflict arises about which is more important—protecting community interests or safeguarding the rights of the individual—a balance must be found that protects the civil rights of all without limiting the civil liberties of the speaker.” — ABA: Debating Hate Speech

On a closing note, this video is a brilliant example of the difference between the protesters and the rest of us. In the clip Ben Shapiro attempt to cover three terms that the left like to sling around; social justice, white privilege and safe spaces. I say attempt, as he is constantly interrupted by the social justice warrior snowflake mafia chanting things like “safety” and “shame”. But the really beautiful part is when the audience stands up and begin to counter the yelps by chanting “free speech matters”. Ben even tries to get a discussion going with the mob, but chanting “safety” is more important. It is the perfect example of snowflakes vs. decency, and a brilliant example of what it looks like when idiots run out of sensible arguments.