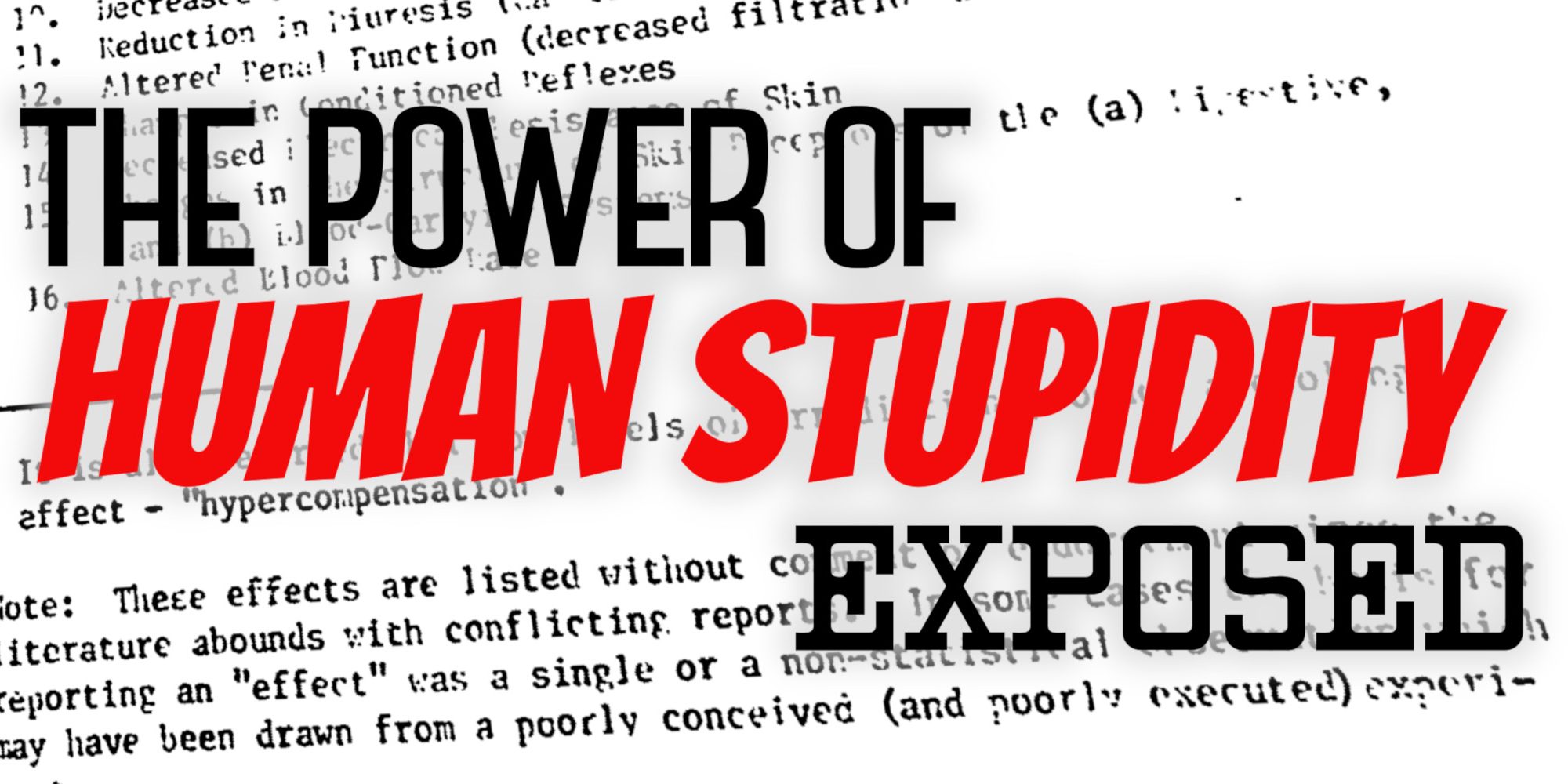 Sarah McLachlan once said stupidity is when you can’t help it — ignorance is when you choose not to understand something, and I fully agree. While I’m really happy to see the world discover the wonders of Science™, the people that all of a sudden think they are experts never cease to amaze.

Today’s delicious treat of misinformation has got to do with radio waves. The YouTube channel Press For Truth published a video last year with the click-baity title Wireless warfare exposed – Declassified military doc proves smartphones are killing mankind, and it is an excellent example of how having a basic understanding of what you’re reading is essential.

For those who aren’t familiar with the concepts, here is the short version. You really should Google this yourself if you are interested, but this should be close enough to give you a rough idea:

Radio waves are electromagnetic radiation that oscillate through the ether from a transmitter, commonly an antenna. These waves are diffused over distance and affected by objects in their path, similar to how sound gets fainter the further you get from the source and how you can only hear the bass from your neighbors speakers. The various frequency ranges (number of oscillations per second) have been assigned to groups, such as “microwaves” denoting frequencies between 300MHz and 300GHz.

We use these oscillations for cooking already. Microwave ovens operate at around 2.4GHz, just like your WiFi, and work by rotating the polar molecules in whatever you are cooking something like 2 million times a second resulting in dielectric heating. A similar technique is used in induction hotplates, although at a much lower frequency (around 24KHz), to through electromagnetic induction heat up the pan or pot.

But WiFi and Bluetooth both use 2.4GHz and neither are able to boil an egg… This is because of the transmission power used to generate or broadcast the signal. Where the microwave generates ~650W of radio waves, your cellphone only generates ~1W. The microwave oven also focus all those 650W off energy on your TV-dinner while the cellphone sends its 1W in all directions more or less.

Visible light is electromagnetic radiation as well, with a frequency between 430THz (that’s 4.3×1014, or 430,000,000,000,000Hz) and 750THz, meaning that microwaves sit happily between your old FM radio and visible light on the spectrum. Simple as that. Besides, the transmitter that makes your FM radio squeak could be transmitting at over 50KW.

The kind of radiation we are talking about here is called non-ionizing radiation. Ionizing radiation is radiation that has enough energy to knock electrons out of their orbits, which can damage your DNA and what not. Microwaves can not.

So, Press For Truth have gone and dug up an old research report from the Naval Medical Research Institute 1)http://safeschool.ca/uploads/Navy_Radiowave_Brief_1_.pdf. The video is more or less an enumeration of a list of symptoms listed in the report presented as being the result of microwave radiation. Holy crap, this guy was aiming to shoot the barn and blew up the outhouse.

Firstly, the report is from 1971. According to Google Scholar there has been at least 20000 papers released since then on the effect of microwave radiation on humans. Science is a process where our knowledge is constantly revised and sometimes even replaced as we make new discoveries. (yay heliocentrism!)

Let us look at the table of contents. It appears the full document is at least 95 pages long. We have 14. After digging around for a bit I found a version with 25 pages, which is an improvement. It doesn’t seem like the missing part is too special, but I’m still curious where the remaining pages went in both versions.

The abstract summarize the report. It tells us that what we are looking at is a collection of references to research papers. It says nothing about the results but categorizes them by the symptoms the papers are covering. The next page clarifies a few more things. We can among other things read “UNCLASSIFIED” and “This document has been approved for public release and sale; Its distribution is unlimited” which leads to the obvious questions: Why did it take Press For Truth almost 50 years to expose it, and how hard can it be to understand the difference between UNclassified and DEclassified?

If we move on to page 7, we can find at the bottom of the page what Press For Truth obviously didn’t:

“These effects are listed without comment or endorsement since the literature abounds with conflicting reports. In some cases the basis for reporting an effect was a single or a non-statistical observation which may have been drawn from a poorly conceived (and poorly executed) experiment.“

And that’s it. What Press For Truth presented as a declassified plan for how the government is trying to nuke our brains is nothing more than a list of things people have at one time claimed was due to microwave electromagnetic radiation that has been public since its inception.

There is also a big reason why the military is doing research on this. Need a clue? It keeps planes in the sky, and also helps to shoot planes out of the sky. I’m talking about RADAR. Massive antennas that could be positioned close to people, possibly transmitting radio waves at over 100KW. That is one hundred thousand times more than what your cellphone can give off. Thus it is good to know that your soldiers will not turn into kung pao chicken, and civil aviation benefits from the same knowledge.

Can microwave radiation be dangerous? Probably, but the parameters matter. Will your phone turn you into a mutant? Probably not. Will it cook your brain? Maybe, but I have yet to hear a medical professional tell us how an MRI show patients brains being boiled, and something tells me they look at a lot of brain scans of people that use cellphones on a daily basis.

So don’t worry too much. If you want to feel extra safe, keep your phone with the antenna (which is usually toward the back) facing outward if its in your leg pocket, or in your bag or jacket. And remember that there is a world outside of the screen — if your ear starts to heat up, drop that thing like it is hot! (Since it probably is!) Oh, and trust in science!

I can’t wait for his next video after discovering cosmic background radiation; “The Universe Wants Us Dead! … EXPOSED!”

My heart is broken in the face of the stupidity of my species.